Last year the foxes came back to our garden. The roof of the little shed had rotted and fallen in, but the floor was still intact and two litters were earthed beneath it. The cubs, rusty bundles of tumbling tails and snapping teeth, first appeared in the garden around the same time I brought my baby home from hospital. From the window of the second floor one-bedroom flat I watched the weary vixens standing guard as the cubs flattened emerging bluebells and punctured purloined footballs.

Two weeks later my own mother arrived, admiring the baby and telling me the gossip from my home village and brewing more cups of tea than I could drink. My husband had returned to work and I was grateful for an extra hand on the tiller of those shaky early days. My mother was in the kitchen with the kettle and the noise outside was sudden: a yelp of desperation, with a keen slicing edge. It came again and again, filled with urgency and fear and guts, quickening.

From the window I could see in the garden the mother fox and facing her, a large dark dog. The vixen leapt side to side, crouched, called, leapt again, urging the dog’s eyes to stick to her, trying to draw him away from the shed, away, away and through the hole in the fence at the far end of the garden; but I could see that the dog was too big for the gap, and he knew it too, and then he gave a gruff bark and stepped towards her and towards the shed, sniffing.

My ribs froze. I called out something to my mother and ran down the narrow stairs and out of the door, feet on gravel then grass. The fox still cavorted in her panic, but the dog turned and saw me, ran to me, stopping six feet short and barking an insistent uff, uff, uff that rang off the brickwork behind me. The baby was in my arms, I realised. The bristling dog was bigger than it had looked from the window, and I did not recognise it as belonging to the neighbourhood. I have never been able to read dogs very well.

I stepped backwards slowly, back to the house and up the stairs. Standing at the window and aware now of the sound of my breathing, I watched my mother’s familiar figure appear below. She called to the dog and he came to her, tail wagging and fleshy lips lolling, someone’s pet. She took hold of his collar and led him out of the garden and he trotted away towards the street. He was afraid, she said afterwards as I made the tea, afraid of the fox, and lost, and he felt trapped. Poor thing.

Biography
Meriel Harrison is from Herefordshire and currently lives and writes in Bristol. Find her at @merielharrison. 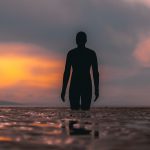 On Crosby Beach by Helen Matthews 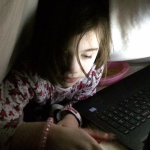 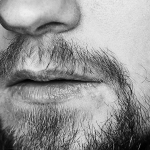 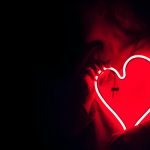