He keeps Dog on a chain outside.  It’s heavy, to build up the neck muscles.  He throws it discounted slimy meat every couple of days, and pokes it with a stick in an attempt to make it growl and snap.  Most of the time, Dog just looks away, ears down, tail tucked.

“Dog’s too sweet natured for you,” she whispers, as she watches through the window.

He had fucked her mind first.  He pushed deep into the recesses of her cerebrum, disturbing her ability to interpret his words, his nuances, and finished with two hard stabs that penetrated her motor cortex, causing a shift in her posture.  She was off balance, the world off-kilter.

“Your friends suck.  They don’t invite you anywhere.”

“I could have gone, it was a group text…”

He took a long suck on his roll-up, exhaling so that his head was veiled by a dense wisp.

“Nah, they’d have called if they wanted you there.”

“It’s okay Baby, you don’t need anyone else.”

“Can you ask around, see who’s got a bitch and wants to breed with Dog?”  He rips open a Slim Jim wrapper with his teeth.

“If I can’t make money fighting him, I need to make money breeding.”  He chews, loose lips smacking, bubbles of Slim Jim juice at the corners of his mouth.  “He’s big, looks okay, he’s just a loser.”

He had fucked her body next.  He kissed her, breathing hard and fast, moving his hand to her jeans buckle.

“Don’t tell me its your fucking period again.  No one bleeds that much.”

“You don’t think I’m good enough.  You don’t want me.”  He lowered his head, his baseball cap shielding his eyes from her.

Square on to her, he put his hands on her cheeks and said, “Prove it.”

“I get a fee for the breeding and a cut of the puppies.”

“You didn’t even want Dog; now you want to breed him?”

She looks over his shoulder, through the window.  Dog is lying in the dirt, head on his paws, thick chain to his side.

Lastly, he fucked her future.  Two fat babies in quick succession, their piercing cries a siren warding off college, scaring away the career in television she dreamed of since the seventh grade mornings she spent watching Casey Anthony’s trial before school.  She hangs out her washing, she pays the sitter while she cleans the office building a mile away, she bathes those babies, hushes them when daddy is sleeping in in the Laz-e-boy, and hushes them some more when daddy is awake.

“I got you something,” he tells her, hand grabbing her waist.

She knows what the bottle means.  She’s exhausted but she’ll let the evening unfold the way he wants.  It’s far more effort not to.

And later, while he sleeps, mouth agape, she’ll slip on her flip flops and creep outside.  In the half light from the moon and the soft glow of the red neon OPEN sign outside the diner across the street, she’ll walk over to Dog.  His tail will flick the dry dust as she approaches.

His wet nose will hit her cheek as she crouches down to him.  His head will be velvet smooth under her palm.  She will unclip the filthy carabiner and let the rusted chain drop to the dirt.

And he will stand for a moment, brow crinkled.  And then he’ll take off, lurching from one side of the road to the other.

Biography
Originally from England, Jo now lives outside NYC.  Her short stories and CNF have recently appeared, or are forthcoming, in Okay Donkey, X-R-A-Y Literary Magazine, Brevity Blog and others.  A writer in residence at L’Atelier Writers for two years, Jo is an MFA student.  Twitter @jovarnish1. 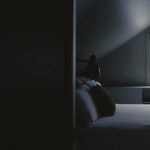 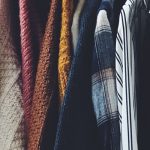 Of Bell-bottoms and Bones by Deborah Torr 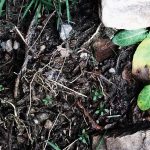 What I Know by Amanda Saint 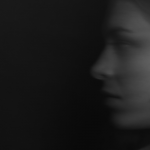