‘Why do we bring up the past when we’re standing in the doorway?’

Lorrie is saying goodnight to her daughter Day when they find themselves going over the recent death of Nat, Lorrie’s long term live-in boyfriend of a few years’ back. They’d only lately heard that he had died.

They hold hands across the doormat.

‘I’ve been feeling strange about it,’ Lorrie admits, hearing her voice quake.

‘Me too,’ Day tells her after a pause. ‘I never thought I would. I always hated him.’

They stare at one another for a minute then Day gives a laugh.

‘Oh, you mean the one time he read to me? From ‘The Little Prince’, wasn’t it? Well, you’re wrong about that. I hated him more than anything then. He just wanted to make good and sure I saw him as a special magical person. Like the boy in the book.’

Lorrie shakes her head. ‘Yes, he had to be the special magical figure in everybody’s life. That’s true enough. He also liked to play outrageous.’

Their minds flick simultaneously to a memory of Nat on the kitchen porch. Swigging wine ostentatiously; hurling a plateful of dinner over at the balustrade to illustrate some point or another. Mortifying Day in front of a group of school-friends who’d come round for supper.

‘But, there was that song about the bears you used to do together. A duet,’ Lorrie reminds her, in an attempt to stave off such negative thoughts.

‘Why’s it the humans don’t like the bears?’ Day sings quickly, then adds: ‘Nat used me as a sidekick when it suited his act. You know that.’

In her mind Lorrie sees Nat standing by a kerb somewhere. Gathering her and her friend Sian towards him so they could cross the road in an intimate threesome. Him between them; a hand on the shoulder of each. When they had first met this was, before she’d been drawn in. She had sensed his actions were part of a little show. As the three of them skipped across the road she had noticed the exaggerated way his knees bent in an attitude of caring; had seen the overdone twinkle in his smile. She’d felt uneasy but hadn’t been able to stop herself from taking up with him. And once they’d got together she’d been only too prepared to reconstruct what was questionable as his charisma. Love was increasingly compelling. Nat on the other hand was only ever seduced by images of himself, never by love. Day is right of course, Lorrie thinks and she lets out a sigh.

She remembers distinctly the last day she’d seen Nat. On the railway platform. He had kissed her, fatuously, self-importantly, on his way to meet the woman he’d left her for. He’d pulled her to him as if they were in an overblown movie. His kiss told her to see this moment as a tragedy which would torment her forever more. He’d tilted her shoulder back so that her head sloped at a submissive angle. But unpredictably, there was fight in her. He got on the train when the doors opened and as it pulled out she’d looked sideways to wreck his finale.

‘I never waved goodbye,’ she tells her daughter. ‘When we parted at the station.’

‘Wouldn’t it have been better to?’ Day asks her mother quietly. ‘If there’s a goodbye then everything’s finished, isn’t it. You’re free and there’s nothing left that can come back to haunt you.’

‘No. Looking away was important for me,’ Lorrie insists. ‘It was a refusal to play the part he’d set up for me. I didn’t need to see anything; look to see how he was looking; smile at him, or cry.’

‘I suppose so,’ Day agrees.

‘But maybe haunt is exactly the right word. I admit I haven’t got rid of him as thoroughly as I’d wish,’ Lorrie goes on to add. ‘I still have this tendency to imagine him seeing me whenever I’ve achieved anything. As though I need his approval. That’s a bit sad it seems to me. Like when I finished the Marathon, and when I won the photography competition. I’d looked up suddenly and seen Nat watching me, his face distant but steadily there. Worst of all is, attention seeking was his addiction, not mine.’

‘I’ve just had a thought,’ Day is saying. ‘You change, you do things, but ghosts are fixed forever. You exist in the now and you want this recognised. A ghost is the perfect solution. Your witness; the everlasting audience.’

Lorrie thinks of a ghost-Nat watching the two of them as they stand talking in the doorway.

‘There’s one nice thing I remember,’ says Day, going back. ‘It’s a neutral sort of memory at least. Nat, swimming, his arms curving through choppy waves. He always liked doing that, didn’t he. You know, when we were on holiday. Before we went and had the hot chocolate in that quaint café with the seashell keepsakes and the pictures of old-fashioned fishing boats. We were both standing on the beach, standing at the top of the sand-dunes.’

All these dangerous margins: Doorway, porch, kerb, platform, beach. Lorrie muses to herself.

‘Swimming,’ Day repeats. ‘The power of it. A life-image, an opposite of death.’

She thinks for a second of Nat’s body reduced by leukaemia.

‘This idea of needing to have an audience is something I’d like to get right away from,’ Lorrie reflects. ‘Tt’s a sign of weakness more than anything else.’

The two of them hold hands tightly a few minutes more. They picture a thin-dead-man swimming along as though in an endless sea. He is looking back at the shore to see if they’re still watching him. 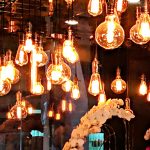 Talking to the Dead by Chella Courington 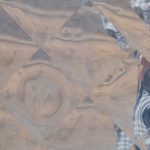 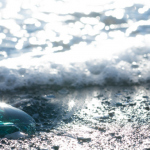 The Exceptional Properties of Sea Glass by Katy Madgwick 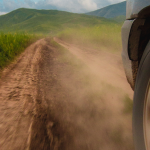