January
We wore shorts and believed the world was dying. You showed me the tooth you lost in a fight. “I can stick it back in,” you said. Your sweaty hand wrapped mine like a glove.

February
Your dad said you weren’t eating enough real food. I slept on your floor and whistled Desperado. You said I was doing more harm to my teeth that way, that I should be sucking in instead of blowing out. Your dad came running into your room. “What’s this?” he asked.

March
The soil cracked and split open. I had a handful of marbles I rolled around on the sidewalk. You came over with your sack of dead birds. “What’s happening?” you said, watching my game. Someone had painted the curb a bright blue overnight. “You see that,” I said, “that means do not cross.”

April
The hottest month on record. Birds stopped dying because they’d gone someplace else. This was when your liver did something funny to the rest of your body. You showed me photos of white spots. You were proud of your plump liver. You promised me you could live forever on all that junk you ate.

May
You scrapped your knee trying to cross the barricade. Police had to be called out. Your dad said, “This is not fun and games, boys.” I sat with you in the bathroom while you dared me to taste your blood. “Just try it,” you said, so I did.

June
We were allowed outside for an hour after dark. The air felt like an armpit and everything had melted—plastic mailboxes, the tar between sheets of concrete. You were on the dead grass with a washcloth over your head. I handed you a still warm marble from inside my pocket. “We can run away,” I said.

July
You learned the meaning of the word onus. Your dad was handing out flyers. He claimed it was his purpose. He drove around in his minivan broadcasting sermons. “Repent or perish,” he said, or was it just perish?

August
They stopped selling shoes. The TV was filled with commercials for air conditioning companies. “I’m tired of looking at everyone’s disgusting feet,” you said. You wrapped yours with paper towels and masking tape. You commented on my one long toenail I was letting grow out like a root. “That’s freaky,” you said.

September
I wanted to kiss you, but your face was molten like the sea. Your dad called me a non-believer, and you punched him in the jaw.

October
“Something should be happening by now,” you said. The blue on the curbs had faded to an almost invisible sky color. “I think that’s still blue,” you said. For Halloween you covered your face with a scarf and went as a wayfarer. The candy was melt-proof and tasteless.

November
Your dad said, “All I want is for it to feel like Christmas.” It was 132 degrees outside. When you carried me on your back I was afraid I was going to slither off. “I’d never let anything happen to you,” you said.

December
We made plans to live like naturists near the South Pole. “I don’t like being nude,” I confessed. You admitted your own bodily issues. “Sometimes my head feels like it’s on fire,” you said. We stole fifty dollars from your dad’s collection jar. “This will get us as far as the ocean,” I said, believing that was enough.

Biography
Nicholas Cook lives in Dallas, TX. His fiction has appeared or is forthcoming in Jellyfish Review, Spelk, (b)OINK, 100 Word Story, A Quiet Courage, and elsewhere. His story The Peculiar Trajectory of Space Objects won second place in the Bath Flash Fiction Award. Find him at @thisdogisdog. 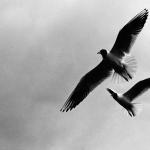 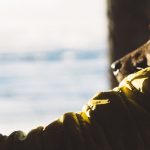 Just the Two of Us by Jake Kendall 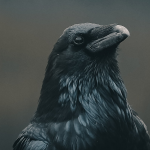 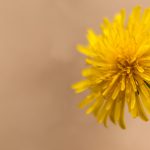