A crow performed an awkward dance while Samuel filled up the car, unaware, and I watched from the passenger seat. The gas station was busy at the end of rush hour, but the crow didn’t seem fazed by the traffic. She bobbed near a dumpster in the parking lot, picking up, shaking, dropping a crumb-filled plastic sandwich bag, then hopping closer to the bag to repeat the steps.

I’d heard that in Japan, the garbage bins had padlocks because the crows there were smart enough to open the latches. But here in California, this crow, a less evolved crow perhaps, struggled with Ziploc technology. She hopped on her twisted twig feet, lifted the bag in her beak, and shook, shook. I could feel the force of her persistence and appetite; each time she dropped the bag I felt disappointed for her. C’mon, girl, get that beak in there, split the seal. I visualized the bag opening as she lifted it over her head, crumbs raining down on her velvet face.

When I met Samuel, he’d seemed sensitive, the kind of guy who would attend to nuance. On our first hike, I admired the clouds. “Beautiful,” he agreed. “Lenticular,” he added. He stopped me from stepping on a banana slug, crouched to observe it with me. Although I should have known better than to extrapolate an entire character portrait from those incidents, I pegged him, that day, as perceptive, empathetic, one of the people Rilke talked about: someone who knew secret things.

Not long after we started dating, he recoiled from a homeless vet asking for change, but he said it was because the guy had startled him. We started arguing when troubling patterns emerged: he refused to call 911 when he witnessed a traffic accident, didn’t want to help find our neighbor’s dog. One evening, when we heard, not for the first time, a woman’s shouts followed by a child’s shrieks in a nearby apartment building, he joined me at the screen door, the sides of his mouth sagging with concern, but protested when I reached for my phone. “Don’t get involved.” When the police came, he went into the bedroom and closed the door, but after they left, he joined me on the couch and told me he was glad I’d called, tried to lace his fingers through mine while I pulled away.

A few weeks later when we walked along the wharf, we saw a Pacific loon sitting nonchalantly on a boat ramp, the water lapping a few feet below. Samuel looked at me skeptically when I told him that loons couldn’t take off from land because their feet were too far back on their bodies, that she was stuck there and needed help getting back into the water. He hung back while I moved forward, took off my sweatshirt to wrap the loon and picked her up, set her in the water, where she swiveled her head as if checking for cross-traffic and swam away. Tourists on the wharf applauded, but back at home, Samuel said I’d embarrassed him, I’d ruined my sweatshirt, the bird was probably injured and I’d done more harm than good. He was angry that I thought he should have helped. We argued some more; he tossed out words like trivial, ridiculous, crazy, and I said uptight, insensitive, deceptive.

I draped my sweatshirt over the drying rack and thought, “This is the penultimate straw.”

The crow was so focused on the bag that she almost didn’t hop back in time when a car turned sharply into the parking lot. I took off my seatbelt and reached through the window to touch Samuel’s arm. “Look.” He turned and bent down to hear me. “By the dumpster.” He straightened, looked at the bird, and left the window to replace the pump.

He walked to the front of the car and stopped, staring at the crow, who was still bobbing and lifting, shaking and dropping. I guessed he was thinking: bird germs, bird flu, but in the end he walked toward the dumpster, approaching the crow tentatively. She hopped back and dropped the bag again, cocked her head and looked up at Samuel, who leaned down to open the bag just as the driver in the car behind me honked her horn. Samuel’s posture stiffened, as if remembering there were other people around. He shook the bag’s contents onto the ground while staring at the crow sternly, like this had happened many times before and he’d grown impatient with the bird and her poor foraging skills.

When the bag was empty, with chunks of (he later told me) crackers on the ground, he stared down at the bird eating, then at the bag in his hand, and back at the crow again. I waited, wondering what was going through his head. Back in the car he told me he’d been considering modeling how to open the bag so that the crow would know what to do in the future. “You know, ‘give a man a fish…’”

At home I got a sandwich bag out of the drawer and attempted to act out what this fishing lesson would have looked like, pawing the bag with one foot and lowering my mouth toward the floor. We laughed in choppy bursts of low and high notes, both of us laughing, both of us amused. I fell on the couch next to him and he grabbed my hand.

Later he told me all he knew about crows and their long memories, their tendency to hold grudges, and their ability to remember those who helped them. A part of me thought, “Yes, this is who you really are.” He described a study with researchers wearing different masks and crows’ reactions toward them. He said someday that crow would come to our rescue, out of gratitude.

Biography
Willow Barnosky lives in Northern California. Her fiction appears or is upcoming in The Honest Ulsterman, Spelk, Feed, and The Write Launch, among others. She hopes to resume her work this fall as an English Language Fellow, teaching and training teachers in Poland. She can be found on Twitter @onomatopoesia. 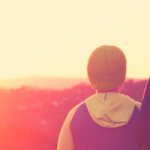 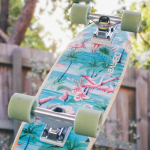 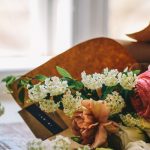 Though Dave has the back of a camel, Diane inherited a retractable pitchfork by Marissa Hoffmann 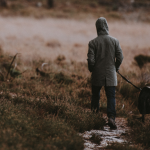 A Good Walk by Tim Craig