All the other kids call him the snake. At first behind his back, but now to his face.

At lunch times he performs his routines beyond the view of the staff room, close to the school boundary. Teachers warn pupils to stay away from the woodland beyond after reports of wandering strangers, and stories of underwear found hanging in branches.

His performance area is a patch of grass in the otherwise muddied and torn up sports field. Here the crowd applaud and chant his name – Snake, Snake, Snake.

This moniker is palatable under the circumstances. It leaves the option to take it as a compliment.

He spends his days studying his own syllabus. Stretching his limbs in English, cracking his joints in History and visualising his performance in Maths.

On his end of year report, it will read lacking in concentration.

His talent is part physical anomaly, part dedication to his craft.

At weekends he practices at a nearby abandoned farm. Here he climbs through the structures and spaces, undulating every double-joint to its limit. Self-awareness pushing him forward. Always challenging himself to improve. Always wanting to keep on the right side of the crowd.

These climbing frames of the wild are his playground, a safe space in the stillness of fields.

His performance begins with the twisting of limbs, a well memorised sequence of internal movements. His bread and butter. The stuff he can do in his sleep.

The other pupils listen to the melody of his frame. The snapping of a joint, the crunching of a bone and a double-snap from the rolling of a shoulder.

For his finale he accepts a challenge from the crowd. A crate is thrown into the arena, smaller than anything featured in his previous challenges. To the snake it is a magician’s prop – with dazzling adornments and dry ice spilling from its interior.

The crowd purrs as he circles the box, lapping up the nuance of his performance. Silence replaces murmur, as he steps into the crate, tapping at the sides for one final assessment.

To the snake, the outcome is never in doubt.

He lowers himself into the crate with movements controlled and methodical, sucking himself inwards across invisible folds. Collapsing like the final days of star. His final flourish is to struggle with his right arm, poking it out of the crate. A naked sock puppet taunting the crowd.

And then he is gone. Submerged inside the impossible space. Slats creaking as they hold firm.

The crowd cheer and then fall silent, conscious of their sounds reaching the staff room. Someone steps forward and places a lid on the crate, confirming the act to be over.

Here the snake will remain until the school bell, cramped, aching but safe. Those other children like him who do not perform also get names. Other names and worse.

For now the crowd are on his side. A relationship aligned with his performance level. Affection that comes at a price. A knowledge that containers and cramp are no longer enough. His bread and butter no longer of substance.

With this is mind he explores the farm for something inspired. Propped up against a milk barn is a gate of vertical iron bars. He visualises his greatest performance – slithering across the width of the gate, rippling his body through the bars, mimicking that of his namesake. The width between the struts is slim. The undulation of his body difficult to rehearse without the bars holding him in shape.

He considers oiling his body, considers removing his clothes.

Under the uncertain skies he studies the gate. A performance with no-one watching.

On the second night he makes another attempt to escape from the gate, tractor oil gleaming over his body. Underwear sits on his slim frame and pale features.

No-one has found him. No other person has been to the farm to look for him. Two days spent wedged in the gate, like a piece of meat waiting on the grill pile. Never has he been so rigid or ran out of room to manoeuvre. Always been able to displace surrounding atoms.

The S-shape of his body grows permanent, the flexing and pulling of his limbs are no longer enough. Occasionally he draws blood across the iron edges of the frame. The slats of his body creak, his skin rusting under the approach of Autumn.

Birds land on the gate as he struggles and insects speckle his skin while vermin watch from a distance. Performance is no longer a consideration, his dress rehearsal is raw.

He makes one final pull for freedom.

Exhausted and thinning he escapes from the gate, shedding his skin in the process.

Biography
Paul Thompson lives and works in Sheffield. His stories have appeared in Literally Stories and The Drabble. More information can be found at hombrehompson.com. Twitter: @hombre_hompson 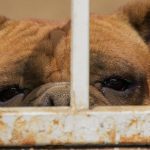 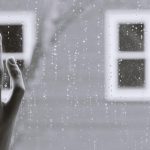 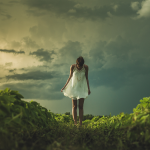 A Painting in the Sea by Katie Lu